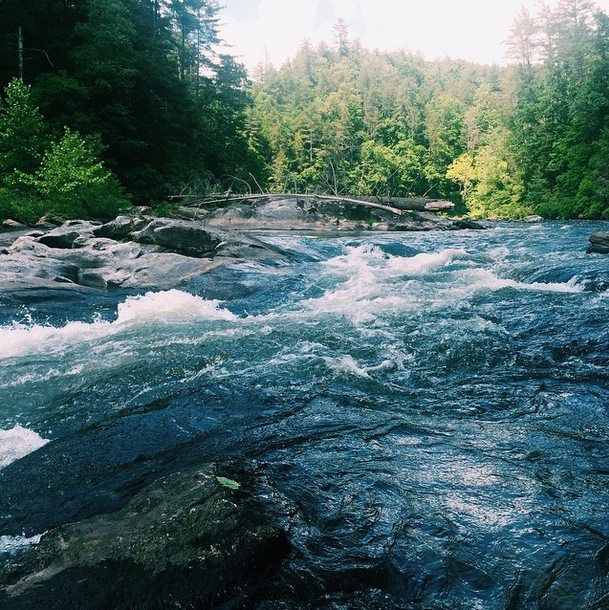 In college I had a list of things I wanted to do before I got married or graduated. One of them was to be a counselor at one of those fun outdoorsy mountain camps. I got my chance right before my senior year, and I was really pumped about hiking to Blue Ridge peaks, making camp-friends, and mentoring youngsters. The pay wasn’t great, but they offered an extra $15 per week for life-guards, so I signed up for their Wilderness Lifeguard Certification course. I knew that the requirements included an initial test of a 500-yard swim, so I conditioned ahead of time at the local YMCA where I was a spinning instructor. I arrived for training to our lovely mountain lake in late May. The waters were frigid. They were so cold, we were told to get out of the water every ten minutes to let our core temperatures warm up to avoid hypothermia. The time came for the 500-yard test, and I confidently lept in the water and stretched out for freestyle swimming. As my face broke the surface of the frigid lake, my respiratory muscles immediately spasming so that I snorted icy water into my nose and mouth. I lifted my face out of the water while trying to maintain my stroke and choked out a mouthful of water and heaved in a very brief, shallow breath before the spasm made me cough again. With a bit of grace from the instructor, I was allowed to gain my composure before proceeding with the test, and with all my willpower and concentration focused on breathing between the chest spasms I managed to finish. Further challenges included deep lake dives to the bottom for a “sweep,” that resulted in one of the other trainees bursting an eardrum, and my first personal experience with true, all-consuming claustrophobia and vertigo in the pitch-black lake bottom. If I had known how to quit, I would have. I struggled on the final to haul a guy 100 pounds bigger than me out of the lake, but I passed my certification.

A few weeks later, I reluctantly led a bunch of little girls on a white-water tubing trip along with 5 other lifeguards. There were about 30 campers, from 6 to 17 years old. My reluctance was due to what I considered unsafe river conditions; heavy rains had increased all rapids by 2 classes, and the river was so swollen with torrential currents, and I didn’t think the little girls and weak swimmers could handle it. Alas, my strong opinions were over-ridden by the other guards, who suggested that we have a system where I “tested” the tubing route as the front lifeguard and then made the decision. I struggled to traverse a rapid as my foot got caught between two large rocks, and looked back to try to wave off the other lifeguards to indicate that I was right, we shouldn’t be in the water! But the wall of campers in inner-tubes coming towards me confirmed that it was too late. I had to abandon my float to rescue one girl who flipped out, and another got passed me. She was swept beyond the deep pool that should have been the exit point on the brief tubing course. I caught up to her and we slipped down a small set of rapids to the next deep pool and I hauled her out. At this point, I was pretty mad, but out of sight of the group. I planned to march up the bank with her and demand everyone get out of the river. I was rehearsing my speech when I heard calls of help from the far side of the river.

What happened next inside my brain is completely inexplicable to me. My conscious thoughts were loudly in denial: They cannot be our campers; they are boys; they do not belong with our group; I do not have to get back in that freezing water. But they were our campers and I found my body moving, first toward my safe camper on the bank asking her to run and get help, and then into the water. The river bank was covered in softball size smooth, slippery rocks. Every step I took, I stumbled. I finally got to water deep enough for me to crawl like a salamander toward them, and I was horrified as they crossed my horizon from left to right. I struggled and crawled and pushed, and finally caught the current. They were gone. I desperately swam down the river, crashed over a rapid, and looked for them. It was another set of rapids before I caught them. Each time I slid over the rocks and crashed down the drop, it hurt. It hurt my feet, my back, my knees, and my legs. I caught the girls and hung on to both of their tubes; somehow they had stayed together. I remembered in our white-water training we were supposed to keep our feet up so that they wouldn’t get stuck between riverbed stones and result in our ankles getting snapped as our bodies got jack-knifed by the current, but I was completely powerless to stop myself from trying to put my feet down to slow us. We met rapid after rapid, and each time I was holding onto the tubes and skidded down the rocks on my back with my head forced down under the tubes and water surface; I braced myself for a blow to the head that I was sure to come.

In the midst of all the turmoil, my brain still somehow made room for thoughts of blame and disbelief, and I was filled with a furious rage like I had never known before. I was angry at the pain and the fearful thought racing across my mind of, “THIS is how people die on rivers. We could all 3 die. THIS is how it happens.” I tried to steer us back to our bank, but made no progress. As I got a brief respite from skidding over the rocks, I looked far down-river, and I’ll never forget what I saw: 100% whitewater. All of the wide-open river in front of us was a churning and rocky field of rapids. I panicked and kicked as hard as I could toward the far bank. One of the girls got pummeled on the back by a large rock and almost popped out of her tube. I held her and her tube and the other tube, and kicked. We landed in an eddy. It all stopped.

I trained my eyes to the water for campers, expecting more victims to be floating down. My rage grew. Beaten up, we hiked barefoot a mile or so downriver, across a bridge, back to our group, and I expected panicked colleagues and a hero’s welcome. Heck, I half-expected some helicopters to be canvasing the river looking for us–it felt like we were gone for hours! What greeted us instead was disinterested blank stares and the phrase, “Oh, we didn’t realize you were gone.” Needless to say, I lost it. I must have said something fairly scary, because within a few minutes, everyone was out of the river, headcount was done, and we were in the vans. I fumed. How could they not even know we were missing?

It took me a while to get over my anger and to stop ruminating about the close-call, but what I ultimately learned was a really profound lesson. As uncomfortable, and frankly horrible, as that experience was, I realized in discussing what had happened with the other lifeguards that I would not have wanted to trade places with anybody.  If someone else had made the rescue instead of me, I would have been crazy jealous. Of course I wish it had never happened, but that’s not reality. It did happen, and in some form or fashion it will happen again. At this point I was heading toward med school, and I decided then and there that I wanted to go after those people that I would encounter throughout life that need rescuing. As a trauma surgeon, in a literal sense “rescuer” has become my chosen vocation.

Residency was at times pretty uncomfortable. Med school, too. I never reached the level of acute suffering, and certainly not personal endangerment, I felt on the river, but I remembered that experience and was emboldened to persevere. My medical missions experiences have also been uncomfortable at times, like when I got norovirus 15 weeks pregnant in Guatemala and needed 5 liters of normal saline before I stopped feeling dizzy. Or sleeping on army cots, working in heat, and failing to fix everybody. My experiences are a mere pittance compared to what our colleagues in war zones and refugee camps endure as they risk everything to rescue as many as possible.

Advocating for a cause is also frequently uncomfortable. Sometimes I still feel like I’m yelling into the abyss of disinterested blank faces trying to convince people that we should be doing something different. Especially in situations that I feel are dangerous or risky, this can be frustrating and draining. In the global health world, the need for advocacy is infinite and immediate. I think this may be among the main stressors of the field. Many worthy causes, and our passion projects, will suffer from lack of attention and support, but it will be up to us to make a strong case for why people should care about what we do. Indeed, people’s lives depend on it.

I suspect the “rescuer trait” is common among humanitarian medicine providers. However, I have also encountered many people who are unprepared for the discomfort and the pain that come with this lifestyle, and it shows in grumpy attitudes, intolerance to local culture, slow progress, and early burnout. I have to admit that I myself was not prepared for the discomfort involved in a river rescue, or even in being a lifeguard at all. We need to carefully prepare ourselves for reality rather than just hoping the mountaintop experiences to put enough wind in our sails needed to fuel the mission. We need to be mindful of our inner conflicts as we encounter difficulty, and support one another as we process new challenges. We need to work to recognize when a colleague needs to talk about it, and lend a sympathetic ear.

My little adventure in the beautiful Blue Ridge Mountain planted this seed in my mind, and I hope that as my professional ambitions take me through some arduous experiences I keep the perspective that it is my privilege to be the one jumping into the river.

This site uses Akismet to reduce spam. Learn how your comment data is processed.